Apéritif – If you thought you did not like Barossa wine, you will come up with other ideas with these

Home » Apéritif – If you thought you did not like Barossa wine, you will come up with other ideas with these
Previous Next

Apéritif – If you thought you did not like Barossa wine, you will come up with other ideas with these

That Barossa has been low on the coolness scale for a while has to do with the wine styles the area is associated with. Although Yelland & Papps is not the first alternative-thinking producer from there, this is an impression that takes time to change.

The many smaller new establishments that have taken place in recent decades, where Yelland & Papps is one of them, are helping to increase the breadth of the offer from this significant supplier of Australian wine. With its 14,000 hectares, the Barossa Valley accounts for a tenth of Australia’s entire wine area.

See all the wines on the pole from this area

At the same time, the region is more complex than one might think. From here come grapes for cheap wine – Jacob’s Creek was born here – as well as some of Australia’s most sought after wines such as Penfold’s Grange and Hensches Hill of Grace.

Here you can read about the latter

The secret lies in the old vines, according to Susan Papps (born Yelland), who together with her husband Michael is behind Yelland & Papps which was established in 2005. Unlike younger plants, the older plants survive without irrigation in this hot and very rainy climate. . But also the use of all the grape varieties that have historically been grown in Barossa, not just shiraz, helps to give a different Barossa expression.

Yelland & Papps Second Take Grenache 2018 offers a very full-bodied and meaty, and at the same time fresh fruitiness in the direction of red ripe and sweet-filled berries that make you think of completely different latitudes than Barossa.

It is, as the name suggests, made from a heat-loving and adaptable grape variety that thrives with the heat and height above sea level in the part of the Barossa where it is grown. Barossa adorns itself with having the world’s oldest grenachine vines that are still in production. In 2009, they even established the Barossa Old Vine Charter with the goal of preserving this heritage. The plants are divided into four age categories; Old Vine is older than 35 years, Survivor is older than 70 years, Centenarian is older than 100 years and Ancestor tops with 125+ years. There are a total of 428 hectares of old Grenache plants in Barossa.

Barossa’s vineyards consist of 69 percent shiraz and cabernet plants. While 9 out of 10 are under the age of 35, the figure for grenache is 36 percent.

Although Yelland & Papps buys grapes for their Grenache wines, all grape material comes from a radius of 10 kilometers from the wine cellar.

Michael and Susan Papps started in 2005.

The grapes for Second Take Grenache are sourced from a vineyard planted in 1953 which is located at 280 masl and has sandy red sedimentary soil. Grenache and sand is a match that produces very perfumed and elegant wines, just think of the best Chateauneuf-du-pape one of all, Ch Rayas , which unlike most others is 100 percent grenache from sandy soil.

Yelland & Papps Vin de Soif 2017 on the other hand is a blended wine , with grenache as the main grape and from plants that are on average 87 years old. It has a quarter mataro in the mix. Mataro has long traditions in Barossa, and is identical to mourvedre. It is the M in the popular / commercial wine style GSM (grenache-syrah-mataro / mourvedre), but also contributes to a number of serious wines, such as this one.

Vin de Soif – which means thirst quencher – is a little softer and more smoky and salty than Second Take Grenache, but still with the same lighter red fruit. Another nice expression for Barossa that can be stored for a few years, but probably does not have the same potential as the pure grenach.

Susan and Michael started up in 2010 with 2 hectares of their own vineyards in the part of Barossa called Barossa (Eden Valley is a separate area within Barossa Valley, a little further east). They were planted with 50/50 shiraz and cabernet sauvignon with ages of 25 and 40 years old, respectively. They are now in the process of replanting the cabernet vineyard with roussanne and grenache blanc.

The reason, according to Susan, is that it will give wines that match their profile with minimal intervention, no acid adjustment and little sulfur, better. Cabernet from a hot climate is not as high on people’s wish list as before, and cabernet was traditionally mixed with shiraz as was previously the case for the aforementioned Grange. Cabernet is on the wane in Barossa. Susan and Michael are obviously not a fan of copying the story, but of picking organically grown fruit when the acidity and aromas dictate it. Therefore, the cabernet plants are sacrificed even if the age is correct.

is, however, made from purchased grapes from a vineyard planted in 2001. The soil and height are very similar to that of Second Take Grenache. The still very fresh wine offers a wonderfully juicy and floral character that only asks to be slurped this summer for the season’s menu, but which can be stored for 5-6 years.

Yelland & Papps Second Take Vermentino 2020 is also made from grapes from relatively newly planted vineyards. It has given a surprisingly acid-fresh wine with hints of flowers and plenty of substance. A great accompaniment to chicken or vegetarian.

Both of these wines are from 2020 – one of the most challenging vintages in Australia – in terms of fires and corona. But Susan and Michael have come out of it well, according to themselves. They were not affected by the fires and since they are only two employees, and are almost self-sufficient since they deal with both chickens, sheep and vegetables.

The reds are from two very different vintages purely climatically; 2017 had the wettest spring in a long time which resulted in higher yields and later harvests. 2018 had a good starting point, but experienced drought midway, which caused the maturation to stop. But thanks to an end described as Indian Summer, the result was good, according to the general report for Barossa.

The next generation follows.

If you want tips on more such wines, be sure to sign up for our newsletter

Everything that is good in this life comes in small portions. This also applies to good wine. Since this column is very popular, the wines mentioned can be sold out in a short time. Sometimes it is a question of temporarily sold out. Then it pays to try again after a week. For wines that are selected as goodies, there is also less availability than for the wine of the week. These are usually more expensive wines. But even these can be quickly sold out, and then it is often a year until they come to the pole again, but then as a new vintage. The one who is waiting for something good .. 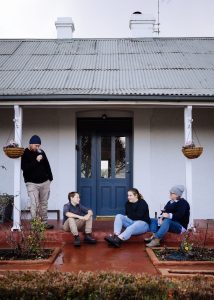